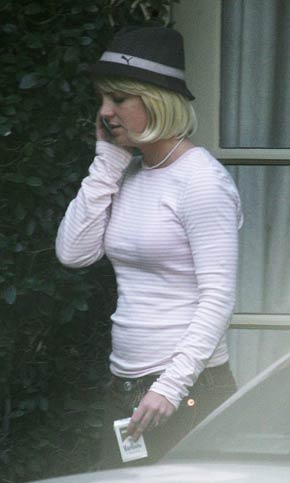 AsÂ we all know by now, Britney crazypants Spears has left Malibu’sÂ Promises Treatment Center, after less than 24 hours in the rehab facility.Â  This is the second damn time that Brit has entered rehab & then left after under a day of treatment.Â  Well, at least estranged husbandÂ Kevin Federline & team K-Fed have the two kids covered.Â

Jeez, predicting crazypants’ next move is like hitting a dart board covered in an L.A. map.Â  Brit might go shave her head at a shabby salon, she might go get some more tattoos, she might go into another rehab center or Britney might even visit some high-powered attorneys on Wednesday.

Yep, that’s just what Spears did after leaving the Promises rehab center.Â  25-year-old Spears was spotted at the law offices of high-powered attorneys Tarlow & Berk, the same duo that represented Mel Gibson on that DUI last year.Â  And believe you me, you really don’t want to have a lot in common with the Gibson, am I right?Â  Britney was seen sitting in the passenger seat of a blue Mercedes outside the office talking on her cell phone, while her cousin Allie Sims was apparently sobbing quite visibly.

One eyewitness to the scene stated, “Brit smoked cigarettes and talked on the phone while Allie had tears streaming down her face. Brit just has a blank look on her face.”

Apparently after all the crying was done & the cell phone had lost its apparent appeal, Spears left the law office around 2pm yesterday, where she was driven & dropped off at the Hotel Bel Air, on Hollywood’s Sunset Strip.Â  Yeah, that’s a great place to avoid the public eye.Â  Take Brit to the Hotel Bel Air.Â  Great idea.

A team Spears member stated that Brit is not doing so hot & is wearing the same pants she’s had on since Sunday, saying, “Britney has worn the same brown jeans since Sunday, because she has no credit cards or cash. She is basically on the run at the moment.

Poor old gal, Britney needs some serious help & I’m quite serious myself about that citizen’s arrest I mentioned earlier.Â  If you see Brit, arrest the damn crazypants woman & take her to the nearest looneybin where she can get the help she so obviously needs.Â

At this point, I just don’t think I can see a comeback album, but maybe good ole Brit can pull it off.Â  Any way you look at it, the Britney Spears sensation is losing its appeal.

You tell me- Is there hope for Britney Spears regaining a hold on reality as well as on her career?

Thanks to Us Weekly for the scoop & the crazypants image.