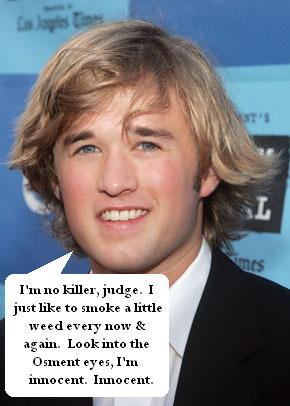 As you’re a Celebrific regular, you’ll remember that wreck Haley Joel Osment had with this Saturn this past July.Â  Well, it looks like the poor chap may have to face some criminal charges after all.

Osment was charged of four criminal counts yesterday in a Los Angeles court.Â  It looks like Haley stands accused of the following:

Poor Haley.Â  Just look at those innocent eyes, I can’t believe they would try & convict the poor lad of these charges.Â  I mean, come on, his name is Haley- give the boy a break.

And didn’t that Justin Timberlake tirade sink in, who doesn’t smoke up?Â  I mean, come on.

Damn celebrities, they get away with everything.Â  Everything expect anti-Semitism.