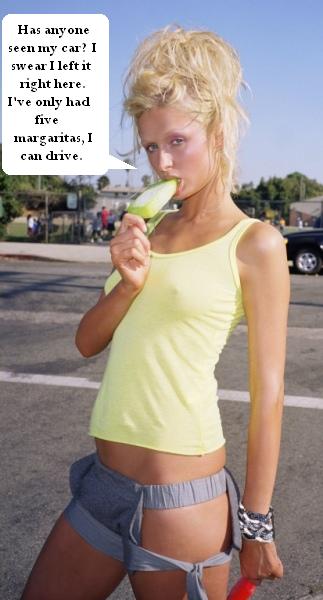 Socialite Paris Hilton hasÂ beenÂ officially charged with that bit of drunk driving she did on September 7.

Los Angeles City Attorney spokesman Frank Mateljan said the 25-year-old actress/brand/singer/star had been charged with two misdemeanors: driving under the influence of alcoholÂ as well as driving with a blood-alcohol level above the legal limit.

An initial court appearance was set for Thursday, but Hilton is not required to attend according to the L.A. spokesman.

The hotel heiress was pulled over &Â arrestedÂ on September 7 in Hollywood after police noticed that she was driving her silverÂ Mercedes-Benz “erratically”.Â  Hilton later claimed that she was merely in a hurry to get a burger for her empty tummy.

If found guilty of theÂ misdemeanor, Paris could face a $1,000 fine and/or six months in jail.Â

Soon after her arrest, Paris’ spokesman Elliot Mintz made a statement to the press, saying: “Paris regrets the entire event. She had never been arrested before, so to go through the police procedure was very disorienting for her. It was personally humiliating for her. She is not taking it lightly or frivolously.”

Well, I guess it doesn’t pay to be a celebrity sometimes.Â  Poor Paris, yeah right, she’ll look right at home on the side of the interstate picking up trash in anÂ orange suit.