.
You are here: Home / Who's Dating Who / Orlando Bloom & Penelope Cruz Dating? 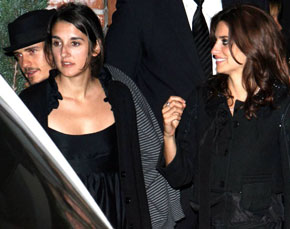 Penelope Cruz is such a beautiful & classy woman, which is why her dating partners have always surprised me:Â  Tom Cruise, Matthew McConaughey & now possibly Orlando Bloom.

On Saturday, Penelope & Orlando were spotted at the L.A. hot spot Hyde dancing to the oldie but goodie song â€œRun Around Sueâ€.Â  Later that evening it is reported that Bloom affectionately kissed Cruz’s hand.Â  I guess since Kate Bosworth is out of the picture, for now, game on.

Tuesday the two were spotted again at club Hyde, but spent more time apart than with each other.Â  Let’s keep an eye on these two & see where this is going.