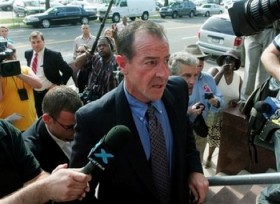 Lohan was asked how he felt about his daughter’s 90 day jail sentence followed by 90 days of rehab and he said he was:

“Baffled, I guess is the best way to describe it. I just don’t understand why Lindsay’s team aren’t taking measures to get her into a rehab. I understand that she wants to appeal her case, but the right way to do it is for her to actually show … or that she has incentive and she’s taking the right steps to get her into rehab before she’s supposed to go into jail.”

Lohan thinks her “team” should get her into rehab first in an attempt to lighten her sentence:

“I think if she does this and files an appeal, maybe the judge will reverse this and say, ‘OK, go to the rehab first. And if you complete it and do it the right way and get off everything you’re on, then maybe there won’t be any jail.'”

The Lohan clan needs to calm down and realize their daughter screwed up and their are consequences.