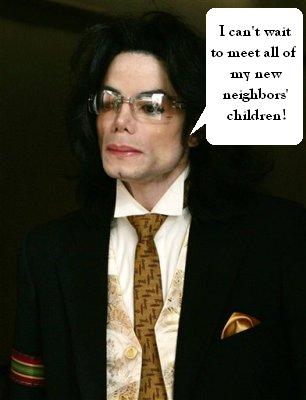 There goes the neighborhood!Â  Europe beware of chimpanzees, child snatching & spiked diet Coke, ’cause Michael Jackson is moving into a town near you.

Pop legend Michael Jackson has decided to move to Europe to escape the judgmental looks he receives in the US as well as take a stab at revitalizing his singing career from the dust bin.Â  Jackson has been residing in the Kingdom of Bahrain, the borderless island nation in the Persian Gulf, since his acquittal of child molestation charges in 2005.Â  Jackson himself seems to be a borderless island nation in the Gulf of Crazy Pants.Â

AÂ spokeswoman for Michael stated, â€œHeâ€™s just decided that with all of the projects heâ€™s going to be involved with and all of the people heâ€™s beginning to work with in the music industry, itâ€™s easier (to live in Europe).Â  Heâ€™ll be going back and forth to Bahrain but Europe will be his principal residence.â€

No word as of yet on where exactly in Europe the pop starÂ will be living.Â  I wouldn’t be surprised if he moved to Canada because he thought it was Europe.Â  Michael just likes to get a buffet sampling of children around the world I guess.