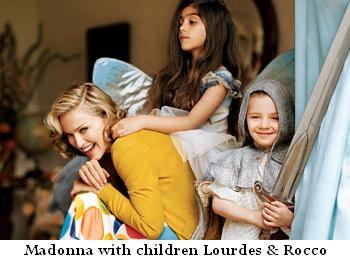 The queen of pop has a new baby, a baby boy to be exact.Â  Madonna did indeed adopt a baby in the African country Malawi on Wednesday.Â  There were rumors abounding about this news prior, but the adoption has been confirmed.

43-year-old Madonna arrived with her entourage in the Malawian capital Lilongwe early WednesdayÂ by private plane & were quickly whisked away to an undisclosedÂ location in a fleet of cars.
Â
Reportedly Madonna chose a one-year-old orphan amoung 12 of the children selectedÂ prior to her arrival.Â  Malawi has countless children orphaned by the AIDS epidemic.
Â
A government spokeswoman stated,Â “She asked us to identify boys only, which we have done after visiting four orphanages in Lilongwe.”Â  Originally Madonna had wanted to adopt a girl, but changed her mind two weeks ago.

Malawi has a ban on non-resident adoptions, but lifted the ban for the queen of pop.
Â
TheÂ newly adopted childÂ will join her other two children Lourdes, 8 & her son Rocco, 6.

I would have the dreadfulest time picking out only one child to adopt, I would want to adopt all 12.