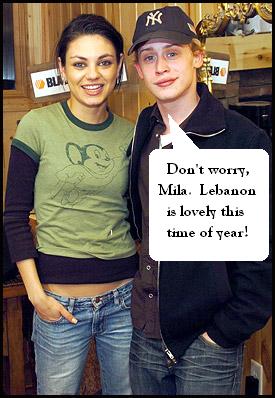 Doo Doo Head Macaulay CulkinÂ & hisÂ girlfriend, That â€˜70s Show actress Mila Kunis, (how ever did he land that one?) thought it was a good idea to vacation in Lebanon this week.Â  He is a Doo Doo Head.Â  Hmmm, think I’ll take my girlfriend to Lebanon & show her all the sights- rockets, death & all that.Â  What a great idea from theÂ Home Alone veteran.

Apparently Culkin & Kunis narrowly escaped from a rocket that his the Israeli town of Haifa where the couple were resorting.Â

Culkin insisted that the pair high-tail it, but Kunis was reluctant to end her vacation early (dumbass!), calling her beau a “drama queen”.

Culkin was able to talk some sense into Kunis & they were able to catch a flight back to the US.Â

Culkin told a flight attendant that rockets were not their only problems on their Lebanon vacation,Â “We went to the beach, and there were tons of jellyfish–so we figured that even the sea was dangerous.”

Wow.Â  I’m no so sure that Doo Doo Head is an appropriate name for Macaulay Culkin.Â  I’m thinking Dumb Ass Head fits a little better.Â  You go to Lebanon for vacation during the start of another war & you complain to the flight attendant, on the flight that is taking you away from the place where you narrowly escaped a rocket, about the damn jellyfish?

Yep, I was right.Â  Dumb Ass Head fits much better.