.
You are here: Home / Mischief & Mayhem / Macaulay Culkin is a Doo Doo Head 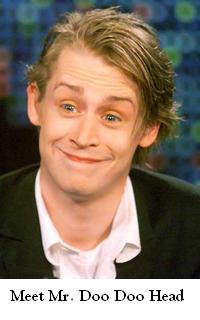 Apparently Macaulay Culkin was affectionately known as one Doo Doo Head by pal Michael Jackson & was a member of a Neverland secret society.

The papers unsealed by California judges contained a photograph of Culkin that was obtained from Jackson’s bedroom.Â

The photo was autographed by Culkin who added ‘Doo Doo Head’ after his name.Â  Well, it does ring trueÂ to the Peter Pan code.Â

It has been reported that the Apple Head Club was a secret society Jackson encouraged his young pals to join.Â  Well, now that kind of rings true to the Manson code.Â

Culkin testified in Jackson’s defense last year saying that he was never molested by the “Thriller” pop star, despite former Neverland workers’ testimony to the contrary.