.
You are here: Home / Conscience & Morality Tales / Lindsay Lohan Gets Her Own Kabbalah Name 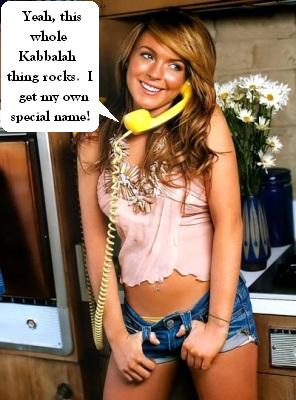 Lindsay Lohan has been givenÂ a new name to add to her collection ofÂ ‘fire crotch’ & ‘teen queen’.Â  She must be so excited.

Lohan has become so involved with the mystical Jewish beleif system Kabbalah, she has been given a name to signify her involvement.Â  Her special name is Rose.Â  Makes sense, they are pretty but that whole damn thorn thing can be a problem.Â  According to reports, Lohan’s name “is partly based on her birth date and place of birth.”

Madonna has been rumored to have been mentoring Lohan, after the Britney Spears fiasco, and introducing her to the mystical (and financial) ways of the religion.Â  Lohan has stated that she finds solace from her hectic life & partying waysÂ in Kabbalah.