.
You are here: Home / Glossy Covers / Lindsay bares her soul 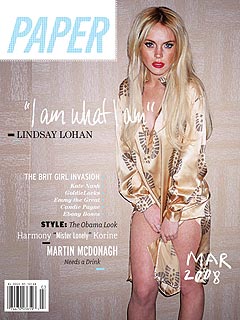 Lindsay shares the emotional pain that drove her to drugs (and rehab) and her fear of being an “out of work actor” in her interview with Paper magazine.

“I hadn’t seen my dad; I had a lot of work stress ’cause I was constantly working and never took time to stop. The easiest thing was to run away from it, going out and drinking at night.”

Rehab gave her the much needed wake up call. “There’s not really much else to do when you’re sitting in a treatment center. It’s like, ‘Why am I here? Let’s think.”

She is now negotiating for a role in a movie about Clara Bow, an “it girl” who (like Lindsay) was caught in the Hollywood craziness, became a wild child, and saw her career (and her sanity) disappear well before her 30’s. She will also begin shooting for her new movie, Dare to Love Me