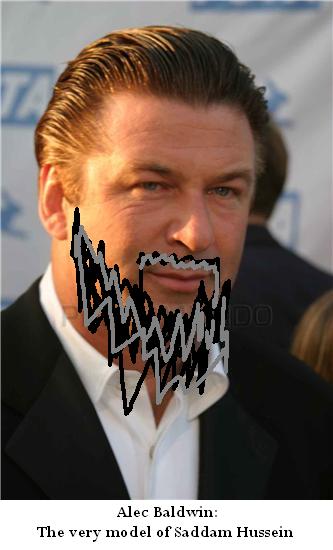 Alec Baldwin feltÂ pretty bad aboutÂ himself when his ex-wife Kim Basinger told him he was as bad as Saddam Hussein.

Basinger madeÂ BaldwinÂ feel so poorly about himself and his fathering that he just wanted to “die.”Â

Alec stated, “My ex-wife once said, ‘He’s Saddam Hussein.’ She said that.”

“And I thought, ‘Do I hide myself in cramped underground quarters? Do I like to shoot firearms in a celebratory way? Did I execute whole villages of people and bulldoze their bodies into a pit? What are you saying? Explain this to me.’

“I remember lying in bed, thinking I wanted to die on the spot. I would say, ‘Please don’t let me wake up. I can’t face another day.’ ”

Wow.Â  Who would have thought a Baldwin could put sentences together so well.Â  That’s way more surprising that that Saddam thing.