.
You are here: Home / Mischief & Mayhem / Saddam Hussein Made to Watch ‘South Park’ 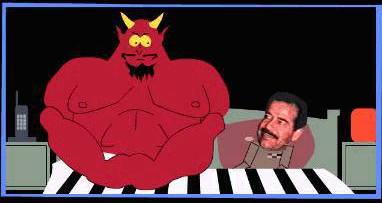 The formerÂ leaderÂ of IraqÂ has beenÂ forced to watchÂ his appearance asÂ Satan’s gay lover in the movie South Park:Â  Bigger, Longer & Uncut.Â  SaddamÂ Hussein is being heldÂ in prison by Marines while he is standing trial on genocide charges.Â

The South Park film was banned in Iraq on its release in 1999 for portraying Saddam as a gay leader with big ideas.

Creator Matt Stone states that Hussein was ‘repeatedly’ made to watch the movie by the Marines.Â  Interesting torture device?

Stone says, “I have it on pretty good information from the Marines on detail in Iraq that they showed him the movie.

“That’s really adding insult to injury. I bet that made him really happy.”