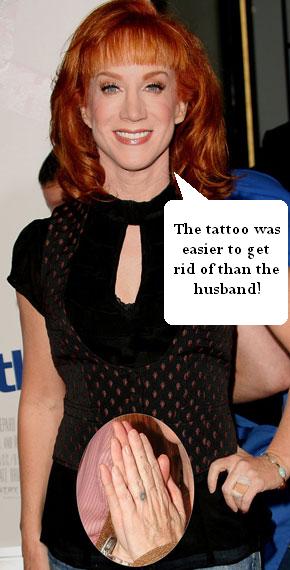 Comedian Kathy Griffin now joins the ranks (Angelina Jolie, Johnny Depp) of those who have had to remove tattoos after the end of a relationship.

The 45-year-old who recently divorced from her husband of five years, Matt Moline, has removed both husband & tattoo.Â  Instead of getting rings when the two once lovebirds married, they tattooed the rings instead.Â  Seemed reasonable at first, but it looks like this marriage wasn’t the forever kind.

When asked about her wedding ring tattoo, Griffin stated,Â â€œI had it lasered off today.”