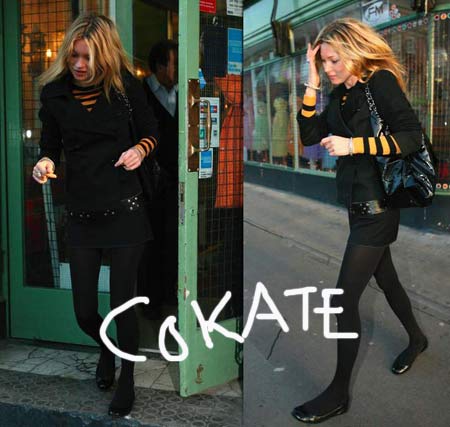 According to PerezHilton, supermodel Kate Moss is no longer sporting her engagement ring from hubby-to-be, junkieÂ & Babyshambles frontman- Pete Doherty.

Does this mean the tides are changing?Â  That the world is a little bit happier & most relieved?Â  Does this indeed mean that Katie Moss has come to her senses & realized that marrying a total junkie probably isn’t the best idea?Â  Yeah, I didn’t think so either.Â Â It’s a better bet that she just leftÂ it by the shower that day.

While fianceeÂ Doherty is spending some much-needed time inÂ a rehabilitation center, Moss takesÂ some shopping time in London Monday, but without that engagement ring.

Let’s make a bet- who’s up for it?Â  Who thinks Kate Moss & Pete Doherty are down the tubes?Â  And who thinks Moss just forgot to put the bad boy on before leaving the flat this morning?Â  You tell me.Â  Answer to come in the following weeks, as we watch, wait & see if Moss marries junkiepants Doherty.