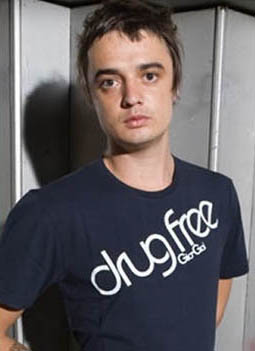 I am growing weary of punching the keys regarding the continued drug abuse by 27-year-old Pete Doherty.Â  I am so tired of this dumbass screwing up his career without question, that any more Pete Doherty drug charges will now belong in the ‘Conscience & Morality Tales’ category.

Now, on to business.Â  Pete was arrested over the weekend for possession of crack cocaine, this is the fifth time the Babyshambles frontman has been arrested for either reckless driving or a combo deal with possession on top.Â  This time around, coppers spotted Pete driving erratically near his East London home & pulled the stupid boy over.Â  The cops pulled over the Jaguar and found (& arrested) Pete and two pals.

Everyone has since been released on bail pending the analysis of the substances recovered; Pete & friends are to report back in December although if history serves true Pete will escape all charges due to a love-a-dumbass pass he apparently carries with him at all times.Â

Here are some Pete Doherty Loves His Drugs Highlights:

November 30, 2005:Â  Pete is arrested for possession of class A drugs after being stopped for erratic driving

December 18, 2005:Â  Pete is once again arrested on suspicion of driving under the influence, coppers find heroin & crack cocaine in the car

January 14, 2006:Â  Pete is one again, again arrested for driving under the influence of heroin and coke

January 26, 2006:Â  Pete is once again, again, again arrested twice in one day — first for driving erratically, then for possession of class A drugs

Well, one thing that you can count on Pete Doherty for, and that’s to be dumbass Pete Doherty.Â  At least he’s consistent.

Tell me what you think.Â  What in the world will ever help Pete get back on his feet?Â  Poor fiance Kate Moss.