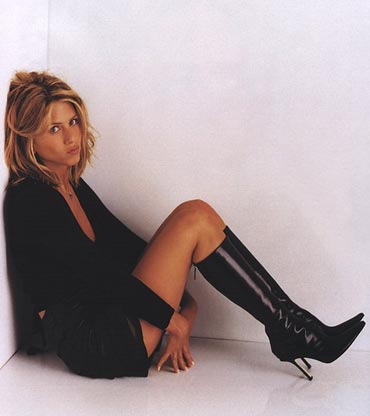 Aniston is so aggravated with the situation, she refuses to watch TV these days.Â  Better for her I suppose, with Angelina & Brad sucking face on camera and possible wedding plans.

Aniston backs up her claims & her TV strike by stating, “What happened to a great half-hour sitcom?Â (Jeez, you tell us!) It’s all Dancing with the Stars, Knitting with the Stars (That’s kinda cute, actually), Building a Home with the Stars, Living in the Home of Stars!Â  And then the ripping people to shreds.Â  Humiliation, degradation.Â  What is going on?Â  There’s so much instantÂ gratification, and we want it.Â  It’s just bizarre.”

“I don’t watch TV anymore.Â  Nothing.Â  I have no interest in that idol shit.Â  Unfortunately the world is in such a state with this war and everything else that it’s easier to look at the triteness of celebrity break-us.Â  It’s like, ‘Ahh, relief.’Â  It’s an escape, rather like a daytime soap opera.Â  There’s nothing left to talk about and I’m just sick of everything about myself.”

She’s sick of everything about herself & there’s nothing left to talk about?Â  What does that even mean?Â  I think Jen has a bad case of the blues, here’s hoping Vince Vaughn can keep her chin up.