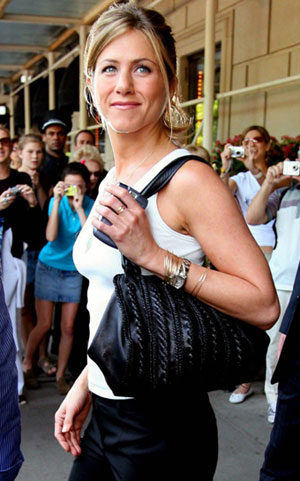 Wow, it looks like 38-year-old Jennifer Aniston is trying to quitÂ her smoking habit.Â  Interestingly, Aniston’s chain-smoking was one thing that annoyed ex-husband Brad Pitt so much that he drew himself into the tattooed arms of Angelina Jolie long ago.

Well, Aniston is off to a good start in trying to break the nicotine habit & is also saying goodbye to caffeine as well.

According to “Dirt” actress Laura Allen, who was with Aniston & 42-year-old pal Courteney Cox when they did the shooting for their lesbian kiss in January,Â Â Jen is staying right on top of her promise to quit smoking.

Allen stated, “Jen was doing a total cleansing.”Â  The actress added that Jennifer “did a lot of yoga to stop smoking.”Â  That’ll do it, as well las drinking loads of water when you’re having that ciggy crave, or so I hear.

“Between takes, it would have been tempting to go outside and have a cigarette. Instead, Jen was clinging to Courteney. She said how hard it was,” Allen went on to say.

Jen is apparently feeling hard core, as she is also kicking caffeine to the curb.Â  No more Starbucks for this star.Â

“I had a Diet Coke on-set, and she was really jonesing for it,” Allen stated.

Jonesing for a Diet Coke?Â  Who ever heard of such a thing?Â

We too can be a part of Aniston’s & Cox’s lesbian love kiss when the “Dirt” episode airs March 27.Â  You can’t wait, can you?