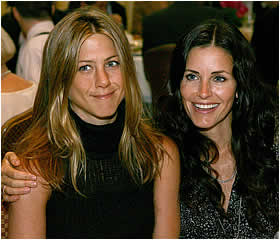 Jennifer Aniston has turned toÂ an army of friends after reportedly callingÂ off her marriage to beau Vince Vaughn.

Jennifer called ‘girl down!’ and the girls came a-running.Â  Cox Arquette hosted a get-together July 24Â in Malibu to cheer Aniston up.Â  Apparently Anniston has been referring to herself as “the new Jen” ever since.

The pow-wow was also a good chance for Crow to thank the girl tribe for their help in getting her through breast cancer.

The all-girl power meeting was a chance for Crow to officially thank her pals for helping her through her breast cancer battle.

Crow revealed, “I had this incredible tribe of women just descend upon me and carry me through the whole experience on their backs.”

Umm, can we get a video of that somehow?