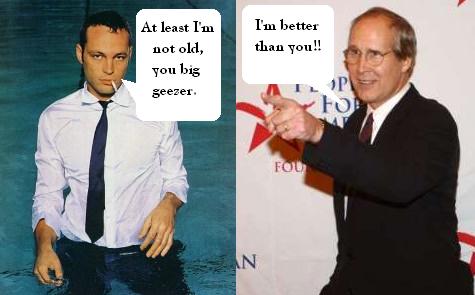 Vaughn as well as Will Ferrell & Steve Carell are often likened to Chase’s old days because the actors have taken on the kind of roles the 62-year-old Chase made in his own hay day, the 1980s.

But the Fletch ‘star’Â lashes out at these comparisons, stating that he hasn’t even seen any of Vaughn’s movies.Â  ApparentlyÂ the guy was funny in years past but gave that up years ago?Â  Â Â

Chase tells PageSix.com, “I saw a commercial with Jennifer [Aniston] What’s-Her-Name, from Friends, and some guy. I had never seen him. I don’t know who the f**k he is. He looks like some refrigerator repairman.”

I think poor Chevy is having some problems getting older.Â  But wait, I think Chase, unbeknownst to himself, has come up with a fantastic idea.Â  A movie starring Vince Vaughn & Chevy Chase as refrigerator repairmen.Â  Chase is the soon-to-be-retiree & is trying to pass on the revered trade to Vaughn.Â  I think it’sÂ a blockbuster.Â  I’m also picturing Angelina Jolie in a small towel spanking Chase & Vaughn for being naughty repairmen…