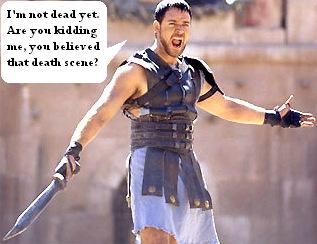 Ahhh, Hollywood directorsÂ can be such creative geniuses, but then they can also be creative, overreachingÂ dingbats.Â  I believeÂ director Ripley Scott & his plans to make a Gladiator sequelÂ to include Russell Crowe’s deceased character falls into the latter category.

Apparently veteran director Scott is trying to formulate his way around Crowe’s character, Maximus, dying and bring him back for a sequel movie.Â  Now you could use back flashbacks & dream sequences, but I don’t think this is what Ripley is going for.

Scott originally made a stab at a sequel in 2003 but abandoned the idea after being frustrated & more than likely realizing it was a terrible idea.

But it looks like creative dingbat has climbed back on that horse & states, “I will probably do a sequel to Gladiator. The only problem is Russell Crowe was such a powerful presence and, of course, Maximus dies at the end.

“We’ll have to get Russell back somehow.”

Oh, well.Â  At least he’s putting his creativity to good use?