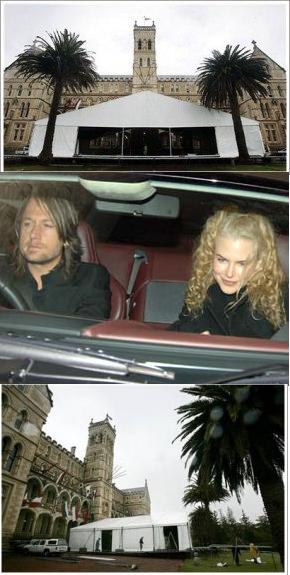 The prenup between Kidman & Urban guaranteesÂ Keith $600,000 for each year they are married.Â  There is a clause that excuses Nicole from giving him a red cent if Urban, an ex-coke head, starts using again or abuses alcohol excessively.Â  The agreement was signed in Los Angeles & also calls for joint custody of any children the couple have together.Â

The big wedding event will happen this weekend in a Catholic ceremony expected to be held at an old Gothic chapel overlooking the sea in a Sydney suburb.Â  The 39-year-old beauty will be wearing a long, white gown with Victorian-style high collar.Â Â

Amoung the 200 guests who will toast the couple this weekend include Meryl Streep, Julianne Moore, Russell Crowe, Naomi Watts, Hugh Jackman & exes RenÃ©e Zellweger and Kenny Chesney.
Â
Urban is expected toÂ sing a few songs atÂ the reception,Â including his ballad, â€œMaking Memories of Us.â€
Â
Meanwhile US WeeklyÂ reports thatÂ Kidman held her bachelorette party at her sister Antoniaâ€™s home.Â  The stripper-free party was quite elegant & included a recipe swap.Â  I wonder if Zellweger was there…Â  She probably has a ‘Why Not to Marry Country Stars’ recipe.