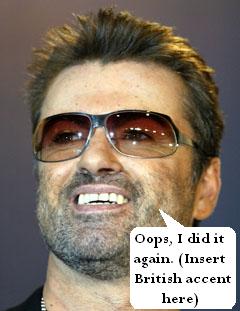 Pop veteran George Michael was arrested yet again SundayÂ after a traffic incident in London.Â  The 43-year-old singer was arrested on a drug-related charge &Â given a warningÂ by police.Â

A Metropolitan Police spokeswoman only stated, “A man was cautioned by police for possession of cannabis.Â  He was bailed to return on a date in November, in relation to being unfit to drive.”

According to the BBC, the coppers were informer that a car was obstruction traffic.Â  After some time an ambulance was summoned & following Michael’s arrest the singer was taken to a west London hospital asÂ aÂ “precautionary measure.”

Kenny Gross, George’s partner, stated after his Michael’s release, “He’s fine and I’ve got him a McDonald’s.”Â  Which is apparently what repeat offenders need, McDonalds.Â  Makes sense, Ronald always did look a little suspicious.Â

This will make the third arrest for suspicion of drug possession for George.Â  In February he was found clumped over the wheel of his automobile in London’s Hyde Park.Â  In April, the pop menace struck again when he damage three of his neighbors’ cars with his Range Rover.Â  Oops.Â  Michael later called the incidents hisÂ “own stupid fault.”

Poor George.Â  He really does need to get a hold of himself, oh, I guess he already did that….