.
You are here: Home / Mischief & Mayhem / Our Georgie Boy Is Arrested Singer and general trouble-maker George Michael was arrested late Saturday evening in London, near Hyde Park.Â  Was he preaching to the masses on a soap box made of silly putty and orangutans & was arrested for suspicious ideas and cohorts?Â  No.Â  Was he making sweet love in the park loo whilst looking in the mirror?Â  Surprisingly, no.Â  Was he simply arrested on principle for that terrible, squinty British constiapated look he shares with us?Â  He should be and shouldÂ have been, but sadly, no.

The 42-year-oldÂ hipster was spotted by a passer-by in central London, slumped over in the driver’sÂ seat of his Range Rover.Â  He was arrested on suspension of possessing drugs (which he had in a small quantity- cannabis) and later bailed pending a return to the station next month.

I would like a better story than this to occupy our headlines this Monday morning.Â  Something like:Â  George Michael, after facing bad hair and facial expressions, escapes time and space to become Captain 80’s Man.Â  He rescues maidens from Whitesnake, is seen helping old ladies cross Thunderbird-ridden streets, dares to wear the most leather-ed outfits and calls his mum once a day to make sure she’s keeping up with his clippings.Â  Captain 80’s Man saves the day once again for all of us!Â 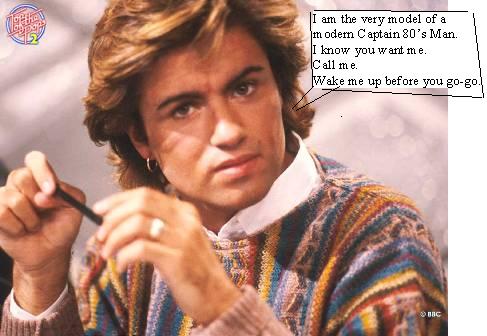