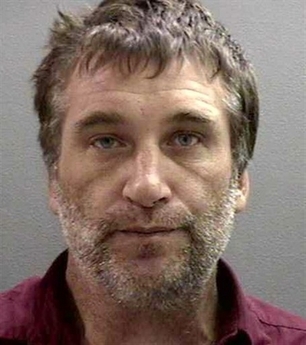 Failed Baldwin,Â Daniel, was arrested in Santa Monica Wednesday on suspicion of being in a SUV that did not belong to him, otherwise & sometimes known as ‘stealing.’

Wednesday officers in Santa Monica saw Daniel driving a white GMC Yukon in neighboring Orange County, and when you see Daniel not in a dirty corner drinking beer, you know something is up.

The sometimes actor wasÂ taken to jail & booked for grand theft auto, unfortunately here, not a video game;Â Baldwin’s bail was setÂ at $20,000.

“The car belongs to an acquaintance of Mr. Baldwin, but he had no permission to take it,”Â stated a spokesman for the Orange County sheriff’s department.Â  I wonder who the acquaintance was, eitherÂ another Baldwin or his drug dealer I’m guessing.Â

This has been a bad year for Daniel who in July drove a rented vehicle at more that 80mph through L.A. traffic and crashed into two cars, that were parked.Â  Oops.Â  Also, in April this particular Baldwin was arrested for cocaine possession, although felony charges were never filed.Â  Well, that was nice of them to let that slide.

Well, there goes another Baldwin.Â  Maybe he can write a book now….