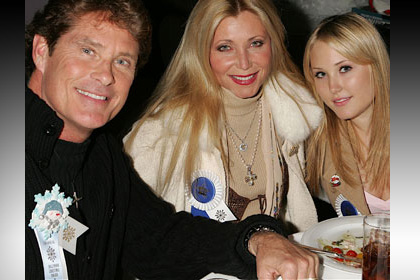 Wow.Â  Pamela Bach must be a really bad mum if David Hasselhoff won temporary custody of their two kids.Â  For some amazing reason, even after the infamous drunk hamburger-eating video, the Hoff has won the kids.

The court hearing was held Monday & was closed to the press.Â  The judge presiding over the case was reportedly stunned when evidence was given regarding the psychological evaluations of the family.

Apparently Hoff’s ex-wife Pamela Bach was abusive towards her kids as well, especially on young Hayley.Â  Experts also noted that Bach refused to be drug tested.

So, for the next two weeks before the real child custody hearing, the Hoff will be with the kids.Â

Jeez, what could Pam have done that was worse than the drunk hamburger-eating video?Â  Damn!