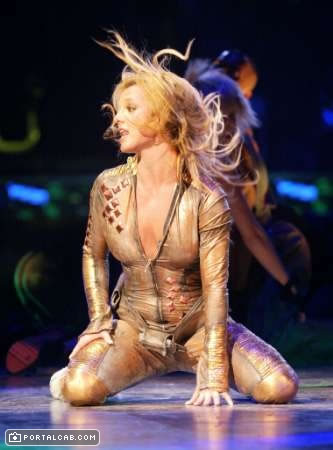 Did you get tingles last night & couldn’t figure out why?Â  Well, it was probably because your girl Britney Spears took the stage for the first time in almost three years.

Spears climbedÂ the stage at theÂ San Diego House of Blues around 10:15pm, where the pop princess performed a 14-minute set for many screaming fans while donning a black wig.Â  Brit lip-synced & danced her way around such favorites asÂ “… Baby One More Time”Â & “Toxic” which featured rapid costume changes as well as some smoke effects.Â  Is Brit back, then?

According to Millennium Dance Complex owner, where Spears has been “working” for the last few weeks, Brit has been working on new material that is similar to her older hits.

“They’ll be in the style we are all used to, the pop thing,”Â reveals Robert Baker.

“But she’s got bigger plans brewing, with music and dancing that’s a break from her old stuff. She’s really excited about that.”

I dunno about this Robert guy, he’s kinda talking like he’s her agent.Â  Better get back in that kitchen quick, Brit, & figure out your damn business strategy!

You tell me- Are you glad the Brit is back?