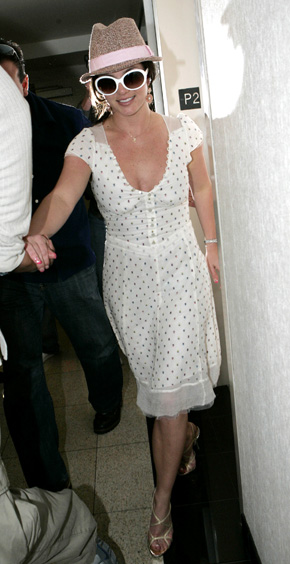 Britney crazypants Spears seems toÂ be keeping her cool after being released from Promises rehab centerÂ last week.Â  The only crazy news being leaked about her weekend this fine morning is that good ole Brit managed to break a tooth.Â  When you eat babies for breakfast, I guess that’s what happens…..

The 25-year-old singerÂ along with two of her girlfriends tookÂ a hip-hop class at Millennium Dance Complex Friday.

“She was very excited to dance and was smiling and saying hi to everyone,” an insider revealed.

Later that evening, Spears was spotted chowing down on some sushi in Bel Air with some pals.Â

According to a source, “She was really cute and having a good time with her girlfriends.”

“They were giggling at the table and making jokes.”

But for some as of yet unknown reason, Britney was spotted late Sunday night at the Century City Medical Plaza where she was checked in for a broken tooth.

An insider reveals,Â “She was smiling for the cameras, but the moment she got into the elevators she was complaining to her bodyguards that it was unfair her tooth was broken, but she couldn’t take painkillers.”

Spears’ tooth was treated by an undisclosed dentist & sent back on her way without painkillers.Â  So, who else here thinks Britney broke her tooth just for the morphine?