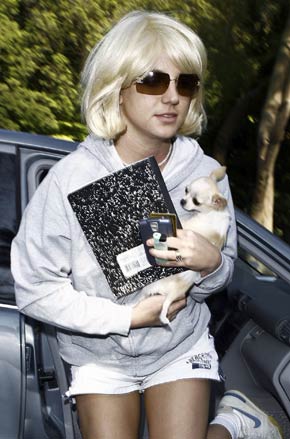 Guess who’s back in rehab?Â  If you guessed Mel Gibson, you’re heart’s in the right place, but the answer is wrong.Â  Britney crazypants Spears thought she would give rehab a second third chance.

Remember that emergency custody hearing we reported about yesterday that was suppose to happen Thursday morning thanks to estranged husband Kevin Federline?Â  Well, it looks like that was actually postponed since 25-year-old Britney decided to return to Promises Malibu Treatment Center by Wednesday night.Â  Maybe this third swing into rehab will be the one that will stick.Â  Quick, someone throw honey all over Brit so she’ll be too sticky to leave Promises again!

According to gossip giant TMZ, this is supposedly Spears’ last chance to get her damn life together.Â  If Brit decides to take off from rehab once more before actually completing the treatment (which usually lasts longer than 24 hours), 28-year-old K-Fed will be able to seek unquestioned full custody of their children, 17-month-old Sean Preston & 5-month-old Jayden James.Â  The inpatient rehab program is generally around 30 to 45 days long.

According to Federline’s attorney,Â “There was never a hearing officially scheduled and there’s not going to be a hearing today from what I understand. Kevin remains a very focused father.”

A publicÂ information director for the Los AngelesÂ Superior Court, stated that there had been “an inquiry” made to the court clerk Wednesday, but did not confirm who had made the inquiry.

“The person who made the inquiry was told they would be accommodated.Â  However, nothing was ever officially filed,” the director stated.

In the meantime, good ole crazypants Brit apparently turned up at K-Fed’s house Wednesday night where she rang the doorbell three times, but was not let inside the home.Â  Reportedly Britney then stormed off, to later be found reporting in at Promises rehab center with her bodyguard along.

Whew!Â  What a crazy ride this has been.Â  Let’s see if Britney can’t spend at least two nights in the rehab center.Â  I’m really rooting for Brit to do it right this time.Â  We’re pulling for you, crazypants.Â  Stay strong.

You tell me- How long do you think that Britney Spears can stay in Promises rehab center this go-round?

Thanks to Us Weekly for the scoop & the crazypants Spears image.