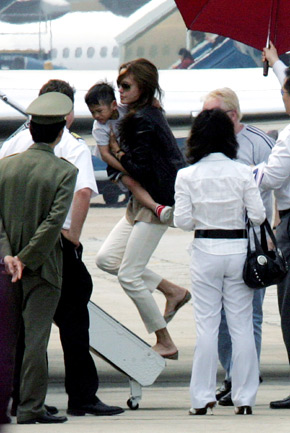 Hot mamma Angelina Jolie filed a petition in an L.A. court on April 16 to have the name of her adopted Vietnamese son, Pax Thien Jolie, to be changed to Pax Thien Jolie-Pitt.

A hearingÂ isÂ to be held at the Santa MonicaÂ Courthouse on May 31 to discuss the name change.

Reportedly, in court documents, Jolie states that she isÂ “the sole adoptive parent of the child” but is requesting the name changeÂ “in order that her child’s last name will incorporate and be combined with the last name of her partner and be the same as that of her other children.”

We all remember, of course, that in January 2006 Ang changed the name of her two other adopted children, Maddox & Zahara, to Jolie-Pitt as a symbol of her dedication to her new partner, Brad Pitt.

Well, it’s all rather sweet if you ask me.Â  Name half the world Jolie-Pitt ifÂ you like.Â  Hell, I might even take the last name!