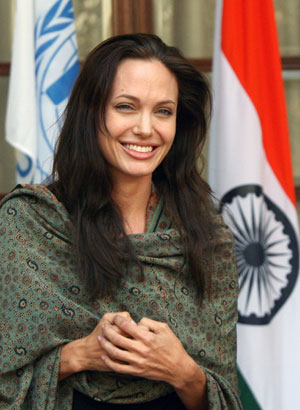 In Angelina Jolie’s travels along the world,Â I have oftenÂ wondered if anyone would tryÂ to kidnap the Hollywood beauty for ransom.Â  And now it looks like New of the World has the answer & the answer isÂ yes.

31-year-old Jolie admits toÂ News of the World that authorities in a country she will not name discovered an intricate plan to abduct the actress.Â

â€œIt was in a small village. I won’t say where, or with whom, but some gangsters planned to kidnap me and extort a massive ransom.Â  I was warned at the last minute, and managed to escape, luckily,” Jolie revealed to the UK paper.

“I don’t want to act like the Mother Teresa of Hollywood,” Jolie goes on to say.

“But I want to help where there is poverty and destruction. I love Brad very much and on our trips we pull together as a team. Things only get difficult when it affects our children.â€

And speaking of children, Jolie & Pitt are currently in the process of expanding their little tribe, the couple will be adopting a boy from Vietnam.

When asked about how motherhood has changed her, Jolie stated, â€œIt made me feel like a complete woman.”

“At times in my life I was lost, without a purpose, now I’m more grounded.”

So, it looks like Angelina will be with us for a while yet, dammit.