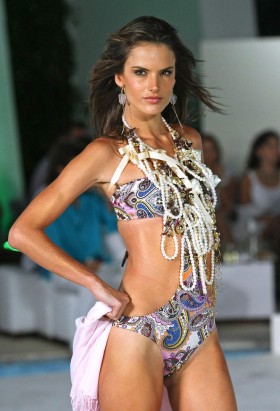 They’re moms in their late thirties, but unlike us mere mortals, they have nary a stretchmark or a dark circle under their eyes, and they’d never be caught dead in mommy jeans and an oversized sweatshirts. These celebrity moms are hotter than ever, and are walking the runways, the red carpets and even Playboy magazine as well as women half their age. It is so damn unfair.

Take Halle Berry. Lithe body, adorable kids, and an Oscar to boot? And what about Victoria Beckham? This ultimate “soccer mom” is still a style setter. Even her papparazzi photos are gorgeous—and unless she’s using some serious industrial-strength body makeup, she doesn’t even have a single stretchmark.

Giselle Bundchen, Alessandra Ambrosio and Heidi Klum are real “model moms” who jumped right back on the runway and magazine covers right after giving birth. Heidi even joined a Victoria’s Secret lingerie show mere weeks after giving birth. Photoshop helps, of course, but even in these event photos you know they’re not hiding any post-baby flab.

And Brooke Burke definitely feels she has nothing to hide: she appeared in Playboy twice since birth of child. Did we mention that she’s 39 years old?
And Angelina Jolie, den mother extraordinaire, hasn’t lost any of her sultry sex appeal—whether she’s strutting in a designer gown or running errands with her kids.