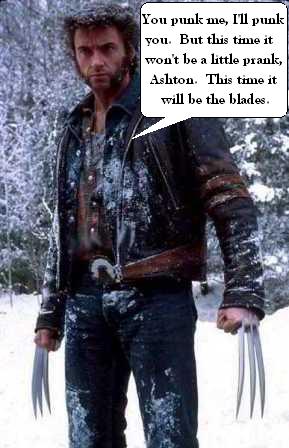 It was all over the blogosphere last month when Punk’d hooligan Ashton Kutcher pulled the wool over X-Men star Hugh Jackman.Â Â With the new Punk’d season underway, I thought we’d take a look at what Hugh had to say about being bamboozeled.

When Hugh Jackman thought he had accidentally blown up X-Men director Brett Ratner’s house, he was completelyÂ horrified.Â  Well, who wouldn’t be?Â  Ratner had staged the joke with MTV Punk’d personality Ashton Kutcher and left Jackman in a state of distress, to put it mildly.

Jackman explains, “I got Punk’d. They tell me it’s the biggest Punk’d they’ve ever done. I go to Brett’s house and he shows me around and tells me how much everything cost–the house itself is worth $14 million.

“Then he goes, ‘I’m going to cook for my girlfriend, but I’ve never cooked before.'”

Brett Ratner persuaded Jackman to take a peek at his grill, as he was uncertain on how to use it.Â  Jackman attempted to light the barbecue, but told Ratner that the wasn’t working properly.Â  TheÂ pair leftÂ for dinner only to return to director Ratner’s home engulfed in flames.

Jackman says, “When we get back there are four fire trucks, 100 fireman. The entire house is on fire. They had explosions, they had smoke, they were throwing couches out the window.

“After five minutes the guy came down and says, ‘We’ve discovered the source–it’s coming from the barbecue.’

“I was shaking and it just went on and on. I’m fully thinking my life is over. They told me three other houses were on fire, I’m thinking I’ve killed someone.

“When the guy told me I’d been Punk’d, I was so into it I was like, ‘How can he be joking at a time like this?’ When I finally realized (what was going on), I just lay down on the ground.

“They handed me the release form to sign and I’m like, ‘Whatever.’ I was this close to throwing up.”

Kutcher did say he felt “evil” and “wicked” when Jackman fell hook-line-and-sinker for the prank.Â  What a life Ashton must live.Â  Fooling celebrities by day, sleeping with Demi Moore by night.Â