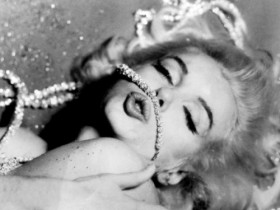 A set of three check X-Rays of icon Marilyn Monroe fetched $45,000 this weekend during a Julien’s Auction in Las Vegas.

The auction, which took place at Planet Hollywood Resort and Casino on Sunday had expected to generate $3,000 for the medical pictures.

The x-rays had traveled the world, arriving in Ireland, Japan and China before landing in Las Vegas to be sold off to the highest bidder.

Other items up for sale was the chair Monroe sat in for her last photo shoot which fetched $35,000 and the Christopher Reeves’ Superman VI costume which earned a cool $32,500.

Another big priced item was the dress Audrey Hepburn war in the movie Funny Face which brought in $56,250.

Julien Auctions has had a knack for undervaluing their Vegas auctions this past weekend, they sold the crystal glove worn by Michael Jackson during his 1984 Victory Tour for $200k, more than 10 times the estimated value of the item.