.
You are here: Home / Career Moves / Usher Has Strep Throat & Pulls Out of ‘Chicago’ 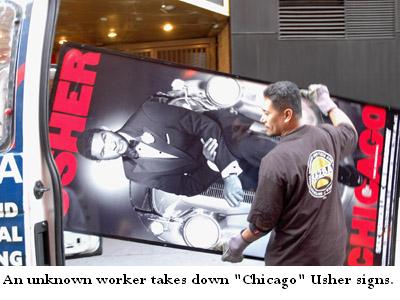 Doctor’s orders, Usher has had to pull out of the Broadway run ofÂ “Chicago“.Â  The singer has been diagnosed with an “extreme” case of strep throat, hisÂ mother/manager Jonnetta PattonÂ stated Thursday.Â

You know if myÂ mother was my managerÂ & I was sick, I think her announcement would go something like this, “I am so sorry, ya’ll, but Allison is feeling sickypooÂ & isn’t going to be able to share her beauty, charm & wit with youÂ today.Â  So sorry, get well flowers are being accepted at the back door.”Â

Before his Broadway run, Usher stated, “If you think that you will be able to indulge in the nightlife, the wild life of New York City and do Broadway, it’s impossible.”

“If you do catch me out, it’ll be a miracle, because I take this that serious. It takes a lot to give 120 percent of yourself as an actor, as a vocalist, as a performer, and do it again and again, for eight shows a week. Broadway is no joke.”

But unfortunately Usher fell sick on Friday, just on the heels of his final week, so understudy Bernand Dotson (don’t you know that was a happy man!) took over the part Billy Flynn.

However, Usher fell ill on Friday, the beginning of his final week, so his understudy, Bernard Dotson, began filling in for him. As his condition progressively worsened, Usher continued to miss shows throughout the week, and fans began demanding refunds. But Usher’s doctor diagnosed and is treating him for an “extreme” case of strep throat, according to his manager (and mother), Jonnetta Patton, and has instructed him not to perform.

“He is really saddened that he cannot close out his last week in ‘Chicago’ with a bang,”Â  mother/manager Patton said.

“He expresses his sincere apologies to all of his fans who purchased tickets to see him this final week.”

“Chicago” producer Barry Weissler stated, “The entire ‘Chicago’ company is sending their thoughts and best wishes to Usher for a quick and speedy recovery.”

“Usher made a spectacular Broadway debut, bringing a great dedication, work ethic, and his amazing talent to the show. We all hope that he might return at some point for the many fans that were unable to see his wonderful performance as Billy Flynn. Usher has found a new home on Broadway and is welcome back anytime.”

Wishing Usher a speedy recovery from his “strep throat.”