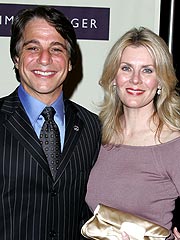 Danza gained fame as Tony from the TV sitcomÂ Who’s the Boss & recently hosted The Tony Danza Show which aired for two seasons before being canceled in May.