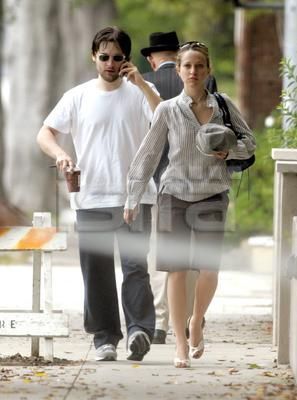 Tobey Maguire not only has a brand-spanking-new fiance, he will never suffer for lack of work.Â  Spider-Man Maguire has proposed marriage to his longtime girlfriend, daughter of Universal Studios president Ron Meyer, 28-year-oldÂ jewelry designer Jennifer Meyer.

Tobey reportedly dropped to one knee and asked for Jennifer’s hand in marriage with a beautiful & stacked Tiffany.Â  As a jewelry designer herself, I wonder what she made of the ring.Â  The cute couple haveÂ been dating since 2003 and share a home in LA.Â

Maguire previously had intimate relations with Spider-Man co-star Kirsten Dunst and was engaged to actress Rashida Jones in 2002.Â  With Spidey 3 now currently in filming, Tobey will be a busy boy with wedding plans.