.
You are here: Home / Career Moves / The UnSweetined Life of Jodie

She is best known for her role as the adorable Stephanie Tanner on Full House with Mary-Kate and Ashley Olsen. Everything else spiraled down for her career after the show ended in 1995.

Jodie Sweetin, now 27, has penned a memoir called UnSweetined, which talks about “things that I’m too horrified to tell anyone.” Among her chronicles are her publicized drug and alcohol use that began at age 14, two failed marriages, and her stints in rehab. She also talked about finally getting sober when she found out that she was pregnant with her daughter Zoie, now a year old.

A Book Party for “UnSweetined” at Nobu on November 17, 2009 in Los Angeles, California.

The book was launched in October, and the actress has been busy doing rounds at book-signing events. She was recently spotted at The Grove in Los Angeles, where she signed copies at Barnes and Noble.

Celebrific wants to know, do you remember Jodie Sweetin? Would you read her memoir? 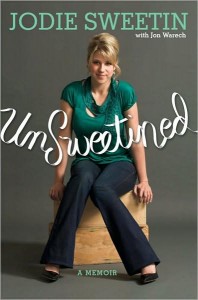