You cannot look back at the â€™80s without talking about The Karate Kid. Ralph Macchioâ€™s boyish charm and martial arts know-how captured the hearts of kids and grown-ups for two sequels. 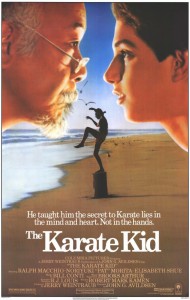 Ralph Macchio in the 1984 hit The Karate Kid

Although he had a promising career as an actor, movie audiences would strongly identify Macchio with his Karate Kid role, Daniel LaRusso a.k.a Daniel-san. Years after his famous Karate flick, he had a difficult time landing challenging and serious film roles. He did hold his own in My Cousin Vinny in 1992 with Joe Pesci and Marisa Tomei, but eventually faded into oblivion.

Other than a memorable cameo in The Entourage in 2005 plus small TV and movie roles, Macchio didnâ€™t have any luck getting back into the limelight. He then focused on projects as a producer, director and writer. This year heâ€™s giving his showbiz career a boostâ€”this time as a reality show star.

The now 48-year-old is in talks with an unnamed network to do a reality show about his family. Heâ€™s been married to wife Phyllis Fiero for 22 years and they have two teenage kids, Daniel and Julia. And no, they are not trying to pull a Keeping Up With The Kardashians or The Osbournes.

Ralph Macchio, 48, at the Couples Retreat Los Angeles Premiere in Westwood at the Mann Village Theatre.

â€œIâ€™ve been in discussions about unscripted ideas before. As far as having an argument over French toast in the morning and what kind of dog we (my family) should get, I think there are smarter ideas and Iâ€™m investigating those,â€ he said.