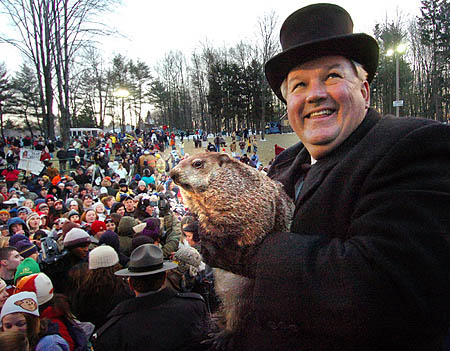 Straight from Gobbler’s Knob, Punxsutawney Phil has seen his shadow. In a tradition going on 120 years, the Philadelphia resident celebrity groundhog has proclaimed six more weeks of this grueling winter season.

In an eloquent, impromptu speech, Phil stilled the audience with the following words:

“It is said that imitation is the sincerest form of flattery.
Around the country there are many imitators of me.
In Harrisburg there is Gus who appears on TV working for the lottery.
Then all around town, cute groundhog statues abound. They all look like me, I found.
Today on the Knob as I’m doing my job, I don’t like this likeness of me.
It’s my shadow I see. Six more weeks of mild winter there will be.”

Phil has said it all, who knew a member of the rodent family could hold such wisdom? Bundle up everyone, we’re in for another six weeks of moderate temperatures and suffering ski resort profits.