.
You are here: Home / Mischief & Mayhem / Spider-Man: Turn Off The Dark To Stay “Dark” For A Little Bit Longer 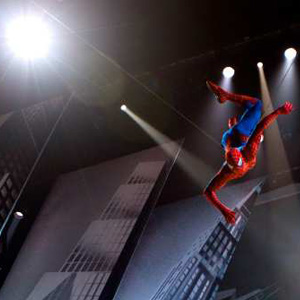 Spider-Man: Turn Off the Dark is on hiatus at the moment while safety concerns are addressed.

The show will stay dark for at least tonight’s show as the production crew tries to work out safety concerns which resulted in a 30 foot fall for actor Christopher Tierney, a fall that required him to have back surgery.

According to a show spokesman, the delay will allow new safety measures to be implemented that will comply with New York Labor Department concerns.

It’s just too bad for Tierney that those concerns with the Spider-Man musical weren’t raised weeks, maybe even months ago when the show began having problems with production standards.