.
You are here: Home / Mischief & Mayhem / Spider-Man Musical In Trouble After Another Accident, Serious Injury 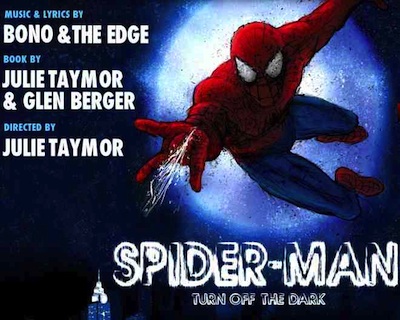 Want a lesson in how to throw away $65 million? Ask Bono and The Edge from U2 to write a Superman Musical and then try to get it made.

Spider-Man: Turn Off The Dark experienced more injuries and set problems this week which has forced the show’s crew to revisit new safety measures.
The shows producers said in a statement:

“OSHA (Occupational Safety and Health Administration), Actors Equity and the New York State Department of Labor have met with the Spider-Man company today to discuss additional safety protocols. It was agreed that these measures would be enacted immediately.”

“Tomorrow’s matinee has been postponed and will be rescheduled. Tomorrow evening’s, and all subsequent performances will proceed as scheduled.”

“OSHA does have an ongoing inspection of that production” while adding, “Our inspection actually started back on Nov. 2 so it’s open and ongoing and of course what just happened adds to it in terms of what we’re looking at it.”

The newest accident which led to even more safety concerns for the show occurred with seven minutes remaining in the show when Chris Tierney fell out of her aerial harness and plummeted 30 feet into a pit. Fans Tweeted that a wire snapped, leading to the fall.

Tierney suffered a few broken bones, including broken ribs and he suffered some internal bleeding but is listed in serious condition at Bellevue Hospital in New York City.

The shows opening night has been pushed yet again, this time from Jan. 11 to Feb. 7.