â€œIf you wanna be my lover, you gotta get with my friendsâ€¦â€ or so this â€™90s pop tune went. The next youâ€™ll hear this famous hit will be in theater with a live instrumental ensemble.

Forget the rumors of a reunion. If you believe the buzz, Londonâ€™s West End is looking for five girls to portray Geri Halliwel, Emma Bunton, Melanie Brown, Melanie Chisholm and Victoria Beckham in a musical about the rags to riches story of the Spice Girls. 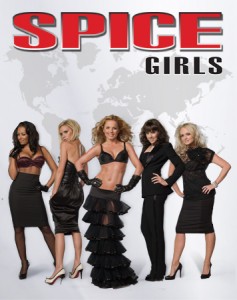 According to mirror.co.uk, â€œProducers will be seeking wannabes capable of a Posh pout, a baby face, a scary look, a sporty back flip, and one whoâ€™s ginger.â€

The two-hour pop musical extravaganza is reportedly Ginger Spiceâ€™s latest big project. She is said to be producing the ensemble, while the other four spices will be involved in the casting and artistic direction of the show.

The Spice Girls formed in 1994 after replying to this open audition ad in British newspaper The Stage: “[sic] R. U. 18-23 with the ability to sing/dance? R.U. streetwise, outgoing, ambitious, and dedicated?â€

They popularized the â€œgirl powerâ€ mania in the mid â€™90s and sold 65 million records worldwide with hits such as â€œWannabeâ€ and â€œSay Youâ€™ll Be There.â€

In 1998, Geri left the group to work on her solo career. The Spice Girls disbanded in 2000, as the other four girls pursued other feats. In 2007, they did a comeback world tour.

Would you pay to watch the Spice Girls Musical?