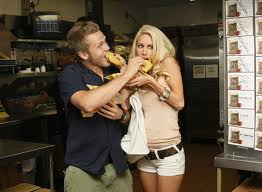 Spencer Pratt and Heidi Montag may be in splitsville with their divorce officially filed, but we may be seeing more of them in action, quite literally. Reports are circling that Spencer Pratt is attempting to sell a sex tape the couple made when still together.

The couple will watch as their divorce is officially completed on Valentine’s Day 2011, but the tape may surface well before that point, while showing Montag in all her naked glory.

Spencer Pratt has offered the tape to the adult industry’s top company Vivid Entertainment, the same company that sold the sex tapes of Paris Hilton and Mindy McCready among others.

According to Vivid CEO Steve Hirsch:

“I just got off the phone with Spencer Pratt about a sex tape with Heidi Montag. We are in early negotiations to possibly come to terms for a deal.”

If sources are to be believed the tape makes “Kim Kardashian look like an amateur.”

Being his douchebag self Spencer had this to say to US Magazine:

“I’ve been making films since I was in the 7th grade,” while adding, “I’m looking forward to people seeing my directorial debut!”

There has been no response by Montag at this time.

The important question though is, was this tape made when she still looked good, you know, before her 10 plastic surgeries, because I don’t want to watch the “new and unimproved” plastic version of Montag on tape.