.
You are here: Home / Celebrities / Snooki Had An Eating Disorder, Weight Fell To Just 80 Pounds 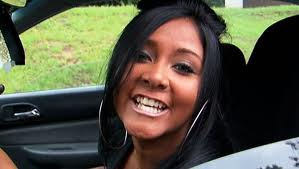 Nicole “Snooki” Polizzi, star of the hit MTV reality TV series Jersey Shore has revealed in the Sept. 27 edition of OK! Magazine that she has battled an eating disorder for much of her life.

According to the reality TV star, her disorder reached a dangerous peak when she became very thin in high school while battling a mixture of bulimia and anorexia that took her body weight to just 80 pounds.

Snooki says of her disorder at the time:

“I would go into the nurse’s office every day and I would weigh myself. When [the school nurse] realized that I hit 80lbs she was like ‘This isn’t good.’”

According to PopCrunch Snooki tells the magazine that younger, thinner cheerleaders at her school led her to question her body image and lose the weight to an alarm rate.

“I was a cheerleader and you had freshmen girls coming up that were so tiny. I think that’s why I had a problem. It got really bad.”

According to Snooki, she was able to get over her weight issues after her parents came to her aid when she confided her issues to them:

“My parents told me ‘You need to eat, this is very dangerous.’ So I gained my weight back to like 98lbs, where I always was. I think I just realised that having a problem – an eating disorder – it’s not healthy and you can actually die from that. I realised it’s not worth it and you just need to be healthy.”

It’s hard for me to picture Snooki as anything other than a drunk bimbo, but at least she’s using her “star” power to raise awareness for a widespread issue…this is the only time she’ll ever hear me say this but….good for you Snook’s.