.
You are here: Home / Celebrific Sighting Pictures / SEEN: 8 Celebs Who Stripped Down This Week

A bit of flesh now and then, especially when it’s from our fave celebs, is truly appreciated. As the old adage says, “If you got it, flaunt it!” So, who’s the fairest of this week’s strippers? You be the judge. 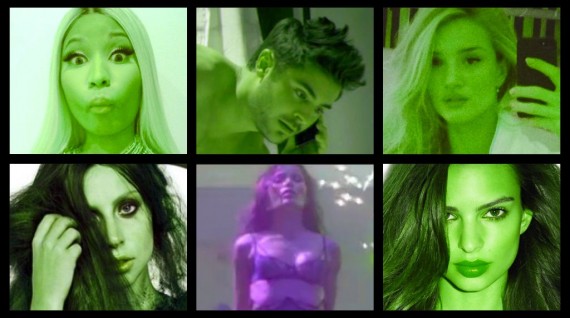 Before you yawn over this, you must know that this is strictly professional. A music video, to be exact. The twerk diva’s been featured on wrapper Future’s single Real and True, and she appears as an alien in the clip – metallic body paint and all.

Last Monday, the model-actress woke up early for the shoot of her “Rosie for Autograph” lingerie campaign with known brand Marks & Spencer, which we hope, includes a better version of this selfie.

Another provocative music video, and this time it’s Bruno Mars’ Gorilla. Pinto is definitely the star of this show as she plays newbie stripper Isabella who pole dances, gyrates, and fulfills Mars’ fantasies by sharing a backseat kiss. More ice, please!

The trailer for Zac’s new feature That Awkward Moment, which also stars Miles Teller and Michael B. Jordan, debuted, and it’s the actor’s sexy bod that caught everyone’s attention. In separate scenes, you’ll see his well-sculpted abs and firm butt firsthand, which should solicit all kinds of thanks from you guys.

Thanks to “Blurred Lines”, this virtually-unknown model bagged a role on the upcoming Gone Girl film and this sexy GQ feature by Terry Richardson. Basically, it’s her just being her playful self — a sure treat when it comes out this November.

“Should I add #Pasties to the Spring Collection????,” Minaj asks alongside a photo of her wearing only these stickables. As a naughty leopard print shaped like a star, it’s safe to assume that the rapper has succeeded in showing off her big breasts. She got that super ‘bass’!

There’s no stopping art-lovin’ Gaga from wearing almost anything. This time, the “Applause” songstress wears moss as part of promotions for her R. Kelly collab, “Do What U Want.” Yeah, she really did what she wanted, huh?

Va-va-voom! It’s body flauntin’ time again for Kim K as she posts her “return to form” selfie on Instagram! Her sultry figure, outlined by a risqué one piece, just goes to show that the newbie mommy’s still got it, despite having Kanye and North West around.