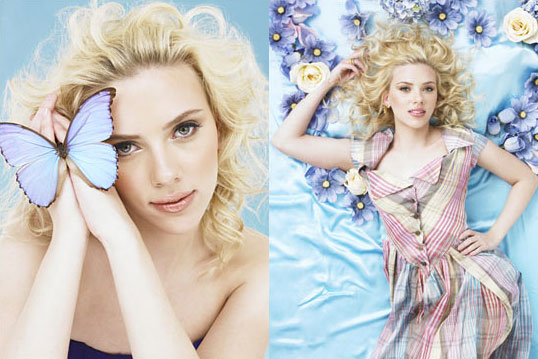 Scarlett Johansson is now an idiot in my book. I know the actress has said in the past that she doesn’t like her face, which is pretty odd anyway, but now the woman has gone so far as to say that she looks like a boy. Man alive, when is this damn woman going to come to terms with the fact that she looks better than the rest of us, because we have already started the healing process on that truth.

In this Sunday’s PARADE, Scarlett is looking lovelier than ever, but after you ready the article you are left scratching your head & hating Johansson even more than you did to start with. Here’s the scoop:

On Scarlett Being a Responsible Woman:

â€œIâ€™m very responsible when Iâ€™m working. Iâ€™ve just been doing it for a long time, and Iâ€™m not the kind of person who is going to show up to work three hours late, or maybe not come at all. Thatâ€™s just not who I am. That just has to do with the fact that I understand that everybody else comes to work, and we would all like to get an extra four hours of sleep, but what can you do?â€…â€œBut [outside of work] I donâ€™t really have any responsibility right now. Itâ€™s not like I have kids. Iâ€™m not raising a younger sibling. Iâ€™m not supporting anybody financially. But at the same time, I can take care of myself. My mother may disagree. Of course, moms always do: [imitates her mother] â€œMy baby, youâ€™re just a child….â€

â€œI donâ€™t think my features are entirely feminine. Yes, I have full lips and obviously I have no facial hair. But…take somebody like Penelope Cruz. Sheâ€™s so feminine. Think about it. She has, like, long eyelashes, and to me she just looks very feminine. When I wake up in the morning and I have no makeup on, like right now, I think I look like a young boy.â€

Wow. Bold statements from the Johansson. Bold looney statements. Is she referring to someone else named Scarlett? She must be! Or maybe seeing Scarlett without all that makeup & picture touch-up is truly a scarey thing. We can only hope…