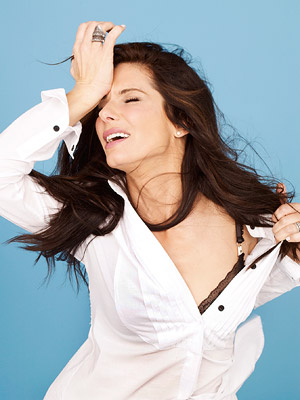 When trying to figure out the comeback star of the year it was pretty easy. Sandra Bullock, who is 45 and still looking suhweet, starred in a couple of blockbusters after having a couple of flops previously. I mean did anyone see The Blind Side doing this well? I sure didn’t. It’s on pace to do over 200M+ domestically for a film that doesn’t tell the real story of a football player. I mean the story is pretty much fake. Yeah I said it, fake.

The football guy it is supposed to be about has been playing football since 6th grade, not high school. Does that matter to these writers? Nope. They could learn a thing or two from Celebrific about sticking to the facts and only presenting what is real to people. You don’t see any of us writing down fantasies just to increase our revenues. We don’t do that kind of stuff here because we believe the truth wins in the end.

The picture of Sandra above is a private one that I had for a number of years. I took it when she first saw me. I’m not surprised by her reaction, but I must admit this is the first time I was able to capture a woman ripping off their shirt when they see me. They usually do it so fast that I am unable to capture the moment, but I was on my toes for this one. I liked that shirt, shame she had to waste it, but at least some good came out of it.

I hate having to get up to get a towel.