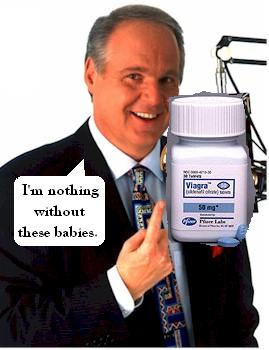 Talk show extraordinaire Rush Limbaugh was detained at a Florida airport yesterdayÂ after authorities confiscated a bottle of Viagra among his luggage without a prescription.

The 55-year-old conservative & Viagra-needer spent three hours in custody at the Palm Beach International Airport following a flight fromÂ the Dominican Republic.Â  The drug in Limbaugh’s possession had two doctors’ names on the bottle & wasÂ not in his name.Â  Â

Limbaugh’s lawyer Roy Black told the press, “(The bottle was) labeled as being issued to the physician rather than Mr. Limbaugh for privacy purposes.”