She finally has put the past behind her. In W Magazine’s February issue, Rihanna graces the cover and talks about being back in the grind. 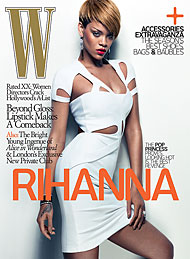 “Not talking was a big thing for me,” Rihanna told W Magazine. She managed to keep mum and stayed away from the craziness last year when the media was all over the Chris Brown story.

In February 8, 2009, her then boyfriend and fellow R&B singer Chris Brown was arrested and sentenced to community service and five years of probation for felony assault, following a domestic violence complaint. Turns out that behind the façade of a happy couple, Rihanna was a victim of violence. It’s been a year since the pre-Grammy incident, and both are leading peaceful and separate lives.

“I’m glad I didn’t talk to people, because I was able to deal with things in my own way, without saying the wrong things or giving people the wrong impression,” Rihanna added. The article wasn’t all about her past rough year. She also talked about her career, the crazy things she does with her “glam team,” and about being “a little older than my real age.”

Inspired by her latest album, Rated R, the photo shoot shows an edgy and naughty Rihanna garbed in designer threads such as Michael Kors, Christian Dior, and Prada.

Check out W’s cover shoot slideshow here, or watch the behind-the-scenes video below.